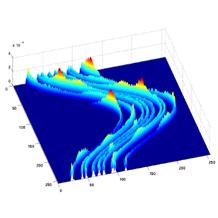 This figure is a three-dimensional representation of the invariant measure of the bouncing ball’s strange attractor. The height and colour of the ridges indicate the frequency of table phase/exit velocity combinations. Higher and redder regions corresponds to more frequent combinations.

To make things even more interesting, let’s say that our ball now has a hard side and a soft side. This means that our constant a will depend upon which side of the ball impacts the table. We can make a rule that says that every time it lands on the soft side, it will surely land on the hard side next time, while after landing on the hard side, there is a 50/50 chance of which side it next lands on. This figure is a representation of the invariant measure for this two-sided bouncing ball system. Because our constant a is varying from impact to impact, the invariant measure is different to before. This means that the frequency of table phase/exit velocity combinations has changed in a precise way.

These figures show a primary numerical calculation of almost invariant sets. The three three-dimensional shapes are the Lorenz attractor viewed from three different angles. The colouring indicates almost-invariant sets by colouring each set a similar colour.

These figures show a secondary numerical calculation of almost invariant sets. The three three-dimensional shapes are again the Lorenz attractor viewed from three different angles, and the colouring indicates almost-invariant sets by colouring each set a similar colour. 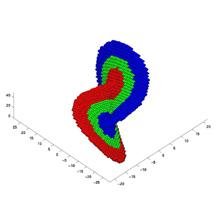 Almost invariant sets are relevant to applications in dynamical astronomy. They can be used to characterise resonance regions in multi-body systems, and to compute transport rates of biological material between planetary objects.