One of the oldest disciplines in mathematics, going back to the work of Pythagoras and Euclid, geometry in modern mathematics takes on a multitude of forms.

Classical geometry of the Euclidean tradition is still going strong, with many new theorems being discovered by the use of Modern Geometry packages such as Geometer's Sketchpad, Cabri or C.a.R., harnessed with symbolic algebra packages like Mathematica and Maple. In particular Triangle Geometry is enjoying a revival, with thousands of Triangle Centers catalogued at the Encyclopedia of Triangle Centers.

Projective geometry is an even simpler and more fundamental geometry, focusing only on the incidence relations between points, lines and planes. Surprisingly simple, it has a power to organise and explain more complicated geometries, and is now a key tool in applications to graphics, optics and robotics. Algebraic geometry is a modern manifestation where more general curves and surfaces, called varieties, are studied using algebraic techniques. This is a rich subject with strong connections to number theory and modern algebra. Differential geometry takes place on a smooth surface, where ideas of calculus come to play. 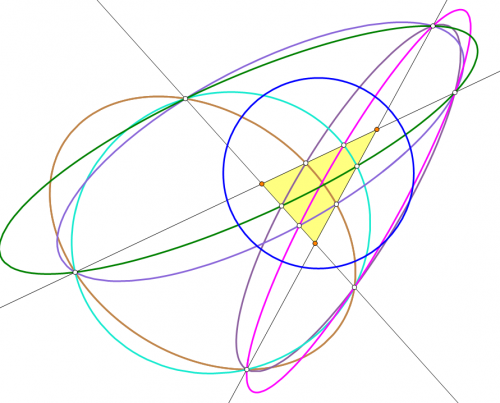 Initiated by C. F. Gauss, the great German mathematician, differential geometry now plays a key role in modern physics, particularly since the ideas of Riemann in extending metrical structures to general spaces was used by Einstein to formulate his great General theory of Relativity. This approach also links geometry with minimal surfaces and topology.

Geometry is often conveniently described using the language of group theory; a famous understanding initiated by Felix Klein. The groups involved can be finite groups, such as the Monster, or continuous groups named after the Norwegian mathematician Sophus Lie. One of the best known examples is the connection between Mobius geometry, complex analysis and Hyperbolic Geometry, involving a small but fascinating group called SL(2).

Hyperbolic geometry, a key development of nineteenth century mathematics, is currently undergoing a major transformation with the application of ideas from Rational Trigonometry.

In modern times, other types of Geometry have also generated a lot of interest. One of these comes from Functional Analysis: non-commutative geometry, which also has strong ties with Operator algebras and Mathematical Physics. In fact Linear Algebra and geometry have many connections. These are even interesting in the infinite dimensional case, where Banach spaces often have rather surprising geometrical properties!

Then there are the purely finite geometries which belong to combinatorics and have connections with coding theory and graph theory.

This age-old discipline is still seeing transformation and new discoveries - quite a few of them happening here at UNSW!