Dr Shane Keating is a lecturer in the School of Mathematics and Statistics. Dr Keating arrived at UNSW in early 2013 from New York, where he'd been working at the Center for Atmosphere-Ocean Science, Courant Institute of Mathematical Sciences. Dr Keating, who is originally from Ireland, opens up about a career that has spanned three continents, reveals how games ignited an interest in maths as a child, and talks about his research in mathematical oceanography.

You came to Sydney via New York, via your home country of Ireland. When you commenced your B.A. in Theoretical Physics in Ireland, did you hope or envisage that your career would lead you overseas?

When I did my B.A. in Theoretical Physics, I was just excited to be moving to Dublin. I grew up in a little village in the west of Ireland. It’s a little fishing village – quite small, a crossroads basically with two pubs, a cemetery and our house! [Laughs] Literally! So I was just excited to move to Dublin, the capital city. But I had no idea at that point how far my education and my career would take me. I’ve been incredibly lucky to be able to live in some really exciting and beautiful places. I’ve lived in Southern California, San Diego, I’ve lived in New York, and now I’m living in Sydney. So I’ve been very lucky to be able to go so far. This is my third continent.

What first sparked your interest in mathematics?

When I was a kid, I was really into games. My dad taught me chess, and I used to play cards and Yahtzee with my grandmother a lot. I loved card games and board games and all that. I also spent a lot of time making up my own games, with my own rules and things like that. But I was never able to convince any of my siblings to play these games with me. [Erupts into laughter] And so, I think that the puzzle solving and creating rules, naturally lent itself to maths. Also, when I was growing up, my father was an electrical engineer. So we had a computer in the house - which was very unusual in Ireland in the ‘80s. We always had a computer, and I was always messing around with it, and eventually was able to write little programs and little games. I think that all of those things contributed towards an interest in mathematics and logical thinking.

When you meet new people socially, how do you describe your line of work?

With difficulty. [Laughs] No, that’s not true actually. When I tell people I do mathematical oceanography it resonates with a lot of people. The ocean has a lot of romance to it, and people connect with the ocean a lot. Even if they don’t understand exactly what it is that I do, they understand that it’s important and that it’s interesting. So I usually don’t have difficulty in interesting people in what I do.

What appealed to you about pursuing maths as an academic career?

When I was contemplating what I was going to do in university, I found it very difficult to decide between doing mathematics and physics, and doing something more artistic. I wanted to get into theatre and writing and that kind of thing. And all the way through high school I was interested in each of those with absolute equal weight. When I came to decide what I was going to do at university, it was one or the other – you couldn’t sort of mix and match. I had to decide what to do. I ultimately decided to do the thing that I found more difficult. To do the thing that came less naturally to me. I know that sounds kind of weird, but I felt that that would be more challenging, but also be more rewarding in that sense. And I think that was the right decision.

What fascinates you most about researching ocean turbulence?

The ocean is very mysterious, still. We know very little about what goes on in the ocean and why. The circulation of the ocean, the currents, rivers of water within the ocean, and so on. We still don’t fully understand where they go and why they do it. The aspect of ocean turbulence that really interests me is “eddy” – so storms, almost, in the ocean, rotating bodies of water tens to hundreds of kilometres across that we can see from space. But we don’t fully understand the role that they play in the ocean and the ocean’s response to global warming and climate change.

The other thing that really fascinates me about the ocean is that it’s extraordinarily beautiful. I work a lot with satellite data, satellite observations of the ocean, and you see really beautiful images from space. Everything from infrared images of sea surface temperature, tracing these incredible labyrinths in the ocean. Sea spirals you can see in sun glitter from space. These were actually some of the first observations made in the Apollo mission – all these crazy patterns on the face of the ocean when the sun was hitting it a certain way. And plankton blooms, hundreds of kilometres long, visible from space. Just really very beautiful images. 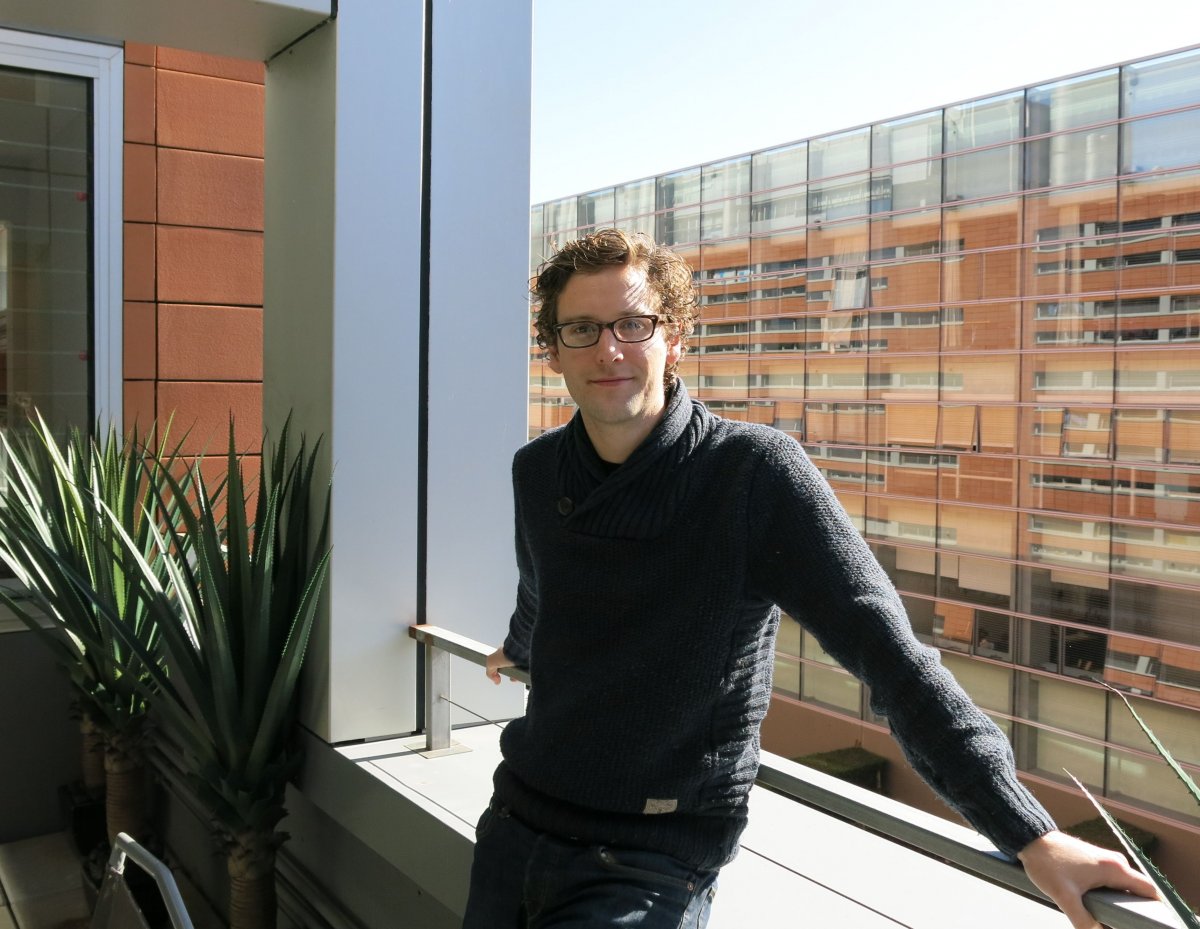 I mentioned the ocean’s response to climate change. In many ways, the ocean determines the timing of climate change because it’s the big heat bath of the climate system. It will determine how fast the world warms up in response to the carbon dioxide we’re pumping into the atmosphere. To be able to better understand the timing of that, which is very important of course for mitigation and adaptation and so forth, we need to understand how the ocean is going to absorb carbon and absorb heat. And that’s very poorly understood. It actually depends upon the turbulent motions in the ocean, all the way down to kilometre scale. So from thousands of kilometres to kilometres and less. Understanding how those scales will respond to climate change is very important. And those scales - kilometre scale eddies in the ocean - start to become very important as well for life in the ocean, for biology in the ocean.

I mentioned phytoplankton, which is basically like the grass of the ocean, the plant life of the ocean. And they’re sort of the basis of all life in the ocean. Zooplankton, and fish, and birds, and turtles and dolphins and seals respond to flow in the ocean because phytoplankton does. I think those are really interesting challenges – the overlap of all of these different things.

How is maths distinct from physics, and in which ways do they interact and correlate?

I definitely consider myself a physicist, but I’ve worked in mathematics departments, and I have a lot of training in mathematics. So there’s a lot of overlap between mathematics and physics. Mathematics, of course, is the language we use to describe physics, but I think my working definition and distinction between the two of them is that with physics, you have to be answerable to data; in the sense that it doesn’t matter how beautiful your theory is, if it doesn’t describe nature, it’s wrong. So I think mathematics is much more driven by the logical and aesthetic aspect of it. Physics is ultimately answerable to nature.

You currently have a UNSW Early Career Research Grant, which involves working with A/Prof Gary Froyland and Dr Moninya Roughan. What can you tell me about that?

It’s an interesting project. So the idea is to use a number of different applied mathematics tools to be able to extract information from observations of the ocean. We’re interested in a particular area off Coffs Harbour where they have a coastal radar array which allows you to observe the ocean on these kilometre scales and smaller, that I was talking about before. This area’s quite an interesting area in the ocean, because it’s where the East Australian Current breaks away from the coast and so it’s quite important for the regional climate and fisheries. And these small eddies, we believe, are pretty important for the interaction of the biology there.

It’s really interesting in terms of trying to study these things, but to study them you have to find them - and that’s a real challenge. So one of the things that we’re trying to do with this early career research grant is to develop new tools for identifying these things – these eddies – in the ocean from the observations, to track them and follow them and also develop techniques for dropping these drifters and things like that into the eddies so that we can measure them as they flow by.

What was the main thing that influenced your decision to come to Australia?

Australia’s quite an important place oceanographically. It’s an island nation, and it’s bordered by three oceans – the Pacific, the Indian, and the Southern Ocean, and it’s very well represented in oceanography worldwide. There are very good people and institutions here in Australia. So it was a great place to come and do oceanography, and in particular UNSW is a very exciting place to come to because there’s an opportunity to do theoretical and mathematical oceanography – the kind of oceanography that I do. It’s probably one of the best places in the world to do it, in this mathematics department. The other thing of course is that there was an opportunity to come and live in a beautiful city in an amazing country, so how could I say no?!

What do you enjoy most about your job here at UNSW?

I really enjoy lecturing, working with students. I haven’t done a lot of teaching before so I was a bit nervous about starting to teach, but I come from a family of teachers - a long line of teachers.

So do you feel it comes naturally to you?