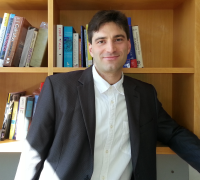 Dr Zdravko Botev lectures in Statistics at the School of Mathematics and Statistics. Here, he reveals what first enticed him to study maths, his favourite probabilist, why he is fascinated by probability, and why he loves teaching UNSW students.

The whole edifice of Euclid is built from five basic self-evident truths called axioms. Just like recombining the eight notes of an octave is enough to create the most beautiful symphonies, so can just five axioms build a grand and exquisite architecture of pure reason and logic. Mathematics can be as seductive as any great piece of art.

I was also very lucky to have an inspirational high school teacher. He understood that the real value of what he taught us was not in the factual content per se, but in teaching us how to reason rationally and logically, and use abstraction to unify different concepts and ideas.

Why did you want to pursue mathematics as an academic career?

One reason is that I wanted to share my passion for science and discovery with like-minded people. I also think that mathematics is not only an indispensable tool in the Natural Sciences that has made our lives long and comfortable with, say, Magnetic Resonance Imaging and smart phones. Mathematics is the only knowledge which can claim absolute truths with the certainty craved by religion. Ever since ancient times our understanding of the world has kept changing - we had to change our views about the origin of the universe; we had to change our beliefs about what makes us ill and how we can cure diseases. Yet in all this whirlpool of constant change, only mathematics gives us absolute security and certainty. What the ancient Greeks proved more than 2000 years ago is still as valid as when it was discovered, and will be valid for all eternity.

It is often said that if one day an alien intelligence visits our Solar System, then mathematics will be our only means of communication. Given all this, how can one not desire to study the only universal language of the cosmos?

How did you end up at the School of Mathematics and Statistics, UNSW?

I was in the middle of a postdoc in Montreal when I applied for a job at UNSW. I was really excited when I was offered the job. Accepting it was a no-brainer, because the School is a mix of young and senior researchers who are great role models for intellectual achievement, fulfilment and success. The environment is highly stimulating, encouraging, and rewards excellence. I was impressed by how highly the School values good teaching. In addition to the many high calibre award-winning researchers, the School boasts many teachers par excellence.

Who is your favourite/most influential probabilist?

The first that comes to mind is Sir Ronald Fisher. Fisher’s is a versatile mind. He is not only the father of mathematical statistics, but he is also the greatest geneticist and disciple of Charles Darwin. He developed 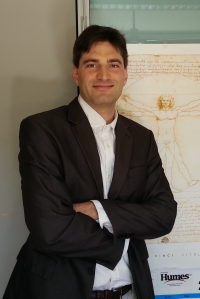 mathematical models to describe the changing frequencies of genes in populations, thus giving solid support to Darwin’s theory of sexual selection. Fisher developed mathematical statistics in part to examine intriguing questions such as: How does Evolution operate on population of genes? What is the future evolution of the human species? Why is there a struggle “between the individuals of the same sex, in order to excite or charm those of the opposite sex, generally the females”?

Who is the most famous person in your maths genealogy?

Apart from Euler, who is ultimately the PhD ancestor of everybody, a more recent one is Diederik Johannes Korteweg, the first PhD graduate of the University of Amsterdam, who is remembered for the famous Korteweg–de Vries equation. This equation gives scientists insight into the behavior of waves on shallow water surfaces.

You published a paper in a top stats journal a few years ago that has made quite a splash – Google Scholar says it’s the second-most highly cited paper published in Annals of Stats in the last three years. What’s it about? Why do you think it has had such an impact?

The paper is about plotting a smooth visually appealing curve that tells us something useful about large quantities of measurements. Unlike in pure maths, in the discipline of statistics we are quite fortunate that simple ideas can be easily used by scientists in all fields. Of course, the pure mathematics of today is the applied mathematics of tomorrow, so we should always encourage fundamental research regardless of any immediate practical applications.

What do you think is the major current challenge in stats?

It seems that the only limitations on the imagination of statistical modellers are computational constraints. It is important that we can invent smart and efficient ways of computation with large datasets and complex models. Thus, inventing new randomized algorithms - possibly for quantum computers - could be the future of statistics.

What are you doing about this challenge?

My focus is on using computer simulated random numbers to mimic processes that exhibit randomness. Also, I design algorithms for the accurate and efficient computation of the probability of occurrence of rare and high-impact events. The area is called Monte Carlo simulation. Originally, the method was proposed by Stanislaw Ulam to help carry out difficult computations necessary for the construction of the atomic bomb during WWII.

The name derives from the European city famous for its casinos, where Ulam's uncle often gambled his fortune on the random outcome of roulettes.

So you study little probabilities… What’s the point?

Rare event simulation and modelling is critical to our understanding of high-cost, hard-to-predict events such as nuclear accidents, natural disasters, and financial crises. We would like to have an accurate estimate of the probability of occurrence of such rare events, but this is typically a very difficult computational task. This is why smart computational algorithms are indispensable.

In addition, probability has important applications in physics. It is currently the most precise description of the physical reality. For example, there is nothing in the laws of physics that forbids me, in principle, to pass through a solid wall. All that needs to happen is for the atoms of my body to coordinate their random chaotic motions in a precise way. The probability of this event happening is astronomically small, which is why I have stopped trying to pass through solid walls, haha. Thus, what we consider physically impossible is sometimes on a deeper level simply a very rare event.

Why, it was by chance of course. Joking aside, I think it was the excellent teaching of one of my professors, who later became my PhD supervisor. His enthusiasm, attention to detail and perfectionism rubbed off on me.

UNSW gets the cream of school leavers in NSW. This is why it is a great pleasure to teach the smart, hard-working, and inquisitive UNSW students. In the great ocean of mathematical knowledge our heads frequently feel like small buoys floating on the surface, yet the students love to be challenged and understand that nothing beautiful and worthwhile is possible without their best efforts.

One of the best aspects of teaching is that explaining difficult concepts clearly is like telling a compelling mystery story. Everybody has an “A-ha” moment when deeper understanding dawns on them! There is the added bonus that unlike fiction, maths describes physical reality, not a fantasy world.

What is your favorite Greek letter?

Hmm, it has to be zeta….. It is the last letter of the alphabet, but importantly the first letter of my name haha.