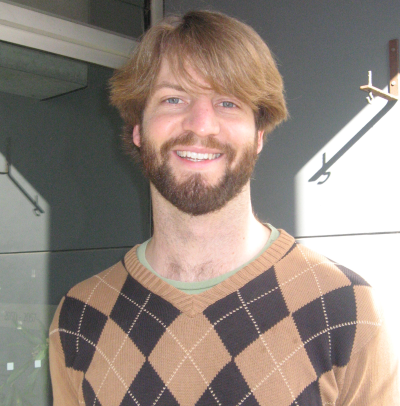 30-year-old James Nichols is in the final stages of his PhD in the School of Mathematics and Statistics. We spoke to him about his experiences as a PhD student, why he pursued postgrad research study, his role models, the connection between maths and music, and his next move.

Tell us about your first degree.

How long have you been studying for your PhD, and when do you expect to finish?

What is your research area, and what appealed to you about this area of study?

My research area is Quasi-Monte Carlo methods, which is numerical approximation of integrands and things like that. I came to it because I was in the industry before, in a bank, and that’s where I met Ian [Sloan] and Frances [Kuo]. They did a partnership with Macquarie Bank where I worked. So they came in and we worked together on different applications in the bank, and I found it quite interesting that there was this area of research which was very applied and very intuitively useful, but at the same time had this kind of theoretical depth to it. That’s how I got interested in it – and because I met them, and I figured that was an easy bridge to getting into the program here.

Tell us something about PhD study that most people don’t know.

I think the last question kind of answers that. I didn’t expect to find a self-directed sense of confidence from it, where after so long of having to kind of be your own boss in some sense, you eventually become good at that. Doing a PhD, you’re not given grades and you’re not given bonuses or pay rises at any point, so you feel a bit weightless – you’re not getting the gold star every day. So you have to deal with that. And in dealing with that you become good at kind of realising how to motivate yourself. And realising you have to motivate yourself purely based on your interests and subject area, otherwise you’re not going to succeed.

I would say Gauss. Newton, yeah he’s great – thank you for calculus, Newton! Euler, well he’s also everywhere. But the story I like about Gauss is how he was commissioned by the German government to help with surveying all of Germany – apparently, this is the story! They wanted him to provide a rigorous methodology for dealing with all of that data and how to go to the land and titles office with all of that information. So he came back with basically the foundations of modern differential geometry, which is pretty cool. You know, he sees a problem, and comes back with the most elegant and universal solution possible – I think that’s amazing.

How old were you when you first became interested in mathematics?

I think it was about year 8 or 9. Whenever maths became more abstract, was the moment I latched onto it. Maybe even later than that. It was kind of two things. It was when maths became abstract and so it was more about logic, rather than just numerics, was when I just instantly went “this is cool”. And it becomes a philosophy of its own. And I also had a really good teacher around then as well who was a good influence. And really, I fully latched on in uni. I guess in late high school, I enjoyed it because I was just good at it. I could just do it and get good grades without studying. That was the first thing. But then uni was when it really became interesting.

What was the main thing that inspired you to pursue maths studies?

I guess this was kind of answered by the former question... The beauty of the logical instruction of mathematics. And thinking geometrically was quite fun as well. As soon as trigonometry came along, picturing all these variable triangles in my head was kind of fun to translate. To translate formulas into pictures in your head was always a weird and wacky thing to do.

When you were younger, did you have any particular role models in the mathematical realm?

I think my biggest role models were two of my teachers - my physics teacher and my mathematics teacher in high school. Particularly my maths teacher, Mr. Smith. He was a bit of a character. He had a lot of flair, and he was a ridiculously over-qualified teacher – he had a PhD from Princeton or something. He was just a real legend.

But then also my grandfather. My grandfather was a big-time engineer; he used to take me to the workshop a lot and show me around, and how to work with wood and simple things like that. But he was also very logical and a mathematical sort of person. And he was the only one in my family like that - both my parents weren’t at all [laughs].

So they don’t do anything related to maths? 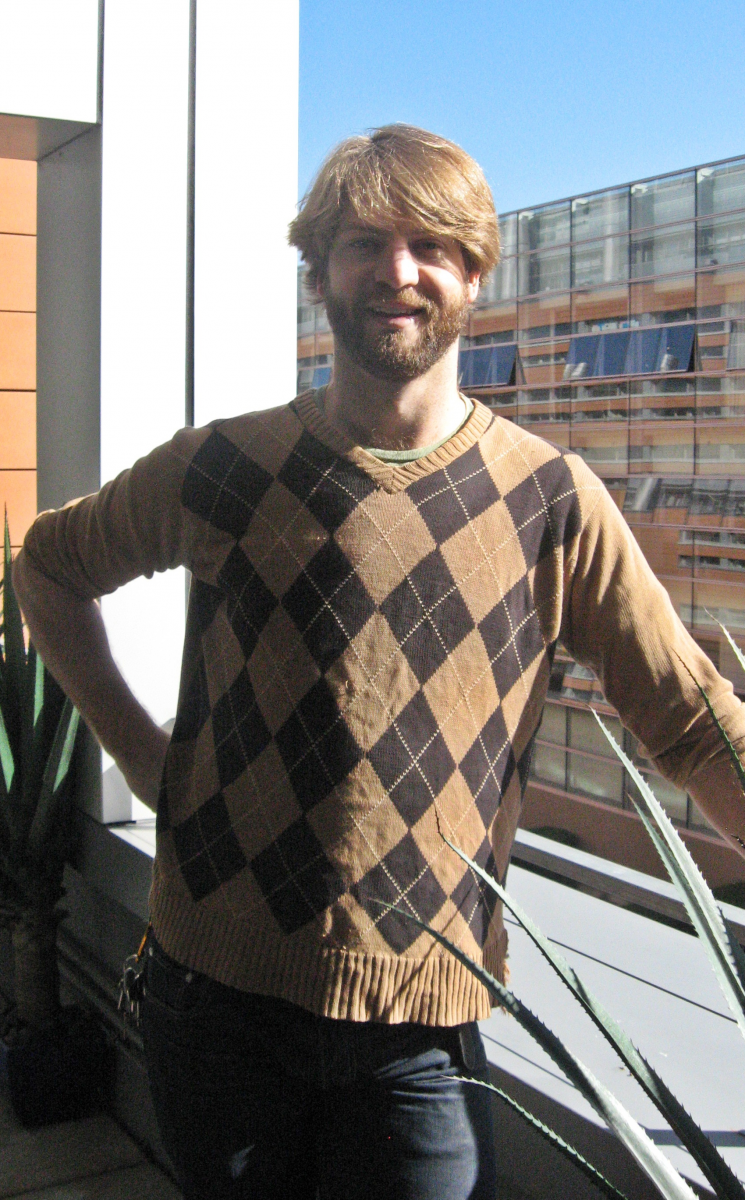 Were they surprised when you took up mathematics?

Yeah, I think so. They didn’t expect it.

Do you have any role models now?

I guess the two big icons of mathematics right now – there’s Terence Tao. You know, his blog is amazing – it’s crazy. It’s really esoteric; it’s amazing what he puts up there. Educationally as well. If you want to actually learn something on a topic, it’s a good resource. I learnt all about an area called Sobolev spaces from one of his blog posts. It was one of the most beautifully written explanations of the concept of different norm spaces that I’d ever seen.

Grigori Perelman because he’s mad. He got awarded the Fields Medal, he solved the Poincare conjecture, he got awarded all these crazy things, but then he said “no” to all of them. He lives in poverty with his mother and gave up maths. He’s totally kooky!

I have some more, actually. I think Feynman and Dirac, two early 20th century physicists. They were just really great problem-solvers, kind of like Gauss.

I’ll look them up. I haven’t heard of those two.

Oh you’ve gotta look up Feynman! Feynman is one of the best to look up on YouTube – there’s a lot of random stuff where he’s talking about things like why railroad tracks work, but in the most simple of terms. He is just like the most intuitive physicist ever.

I’ve been told you play music – what instrument do you play? It is claimed that there is a correlation and interplay between mathematics and music. Do you believe this to be the case?

I play guitar, and have been playing since high school when I was obsessed with Jimmy Hendrix and Led Zeppelin. I’ve also been playing piano now for the last couple of years – I decided I wanted to pick it up. I’m really into jazz piano. Another interesting thing is that I do algorithmic computer music a bit as well.

So this is obviously where mathematics ties in?

Yes, well one of the main places. Definitely.

Do you find that your knowledge of mathematics has really driven and fed into that?

Yes, absolutely, and the reason I find it easy to do is because maths is a huge toolkit to have. I don’t think you’d do it otherwise!

With your guitar and piano, is this something you do personally, or do you play with a band or other people?

Yeah I play with other people, and I do regular jazz jam nights.

So based on your own experiences, you agree that there is interplay between maths and music? A bit of research has been done on this topic.

It’s interesting, in terms of playing an instrument – ignoring the algorithmic music - people always say to me “oh, you’re playing music and you do maths – well that’s logical”, and I suppose it is. But I’m not immediately convinced that it is really the same skillset. Obviously there’s heaps of overlap, like playing scales and knowing theory is quite pattern-based or based on doing arithmetic in your head. And knowing what scales to play and progression is just logical arithmetic really. But then again, performing music is very much about just practicing, and then once you’re playing, letting loose and being creative. So at the same time it’s kind of not. There’s a lot of overlap, but at the same time there’s not!

Your supervisor, Prof Ian Sloan, is considered a bit of a rock star in mathematics circles. What’s it like being supervised by such a legend?

The best thing about being supervised by him, is that it’s a shoo-in to the communities he’s a part of. He’s got so many contacts around the world, and I’ve been to a lot of conferences with him and Frances [Kuo], my co-supervisor. They’re part of such an active and productive community, that you can’t help but get swept into it. You really become part of it. Ian’s a real community-builder and schmoozer, in the good sense of the word. He just networks like crazy. A lot of people say that PhD is an isolating kind of exercise. I find it exactly not that at all. It’s kind of like, I wish I could be more isolated, then I could maybe go away and read more! [Laughs].

What is your next move? I have heard rumours that you will be staying in the School post-PhD!

How did that come about?

I saw an email about it and thought, I should really get applying for post-docs as I’m almost done. It wasn’t originally my plan – I didn’t know what I was going to do. I thought I’d finish my PhD and go back into the private sector or start my own business or something like that, but then I kind of realised I was on a roll.