Although mathematics has been around a long time, there is no agreed answer on what it is about. It is clear what biology is about (living things and how they work), or what history is about (what happened and why), but what about mathematics? Is it about numbers, sets, groups and other "abstract objects"? But if so, what sort of things are they, and why is mathematics so useful in real life? Or maybe mathematics is not about anything at all - perhaps it is just a language of science, or a "theoretical juice extractor" that derives one statement from others.

The "Sydney School", based at UNSW's School of Mathematics and Statistics, instead starts its philosophy of mathematics with applied mathematics, especially mathematical modelling. Mathematics, like biology, studies some real properties of things in the world, and it is possible to say what properties they are.

Mathematics studies the quantitative and structural or patterned aspects of things. A typical mathematical truth is that there are six different pairs in four objects: 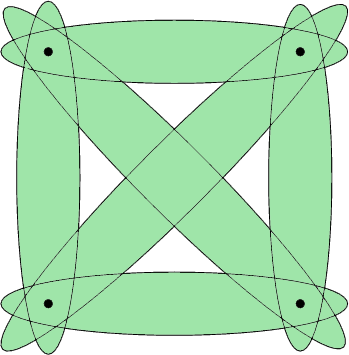 The objects may be of any kind: physical, mental or abstract. The mathematical statement does not refer to any properties of the objects, but only to patterning of the parts in the complex of the four objects. The truth is thus about pure structure, and is also quantitative, in dealing with the necessary relation between the number of objects and the number of pairs.

Roughly speaking, elementary mathematics as studied at school deals with quantity (either discrete, studied by arithmetic, or continuous, as in ratios between continuous quantities like lengths, and as studied in calculus). Higher mathematics studies the more purely structural properties. A classic example is Euler's work on the bridges of Königsberg. The bridges connected two islands and two riverbanks as shown in the diagram:

The citizens of Königsberg in the eighteenth century noticed that it was impossible to walk over all the bridges once, without walking over at least one of them twice. Euler proved they were correct. The result is intuitively about the ‘arrangement’ or pattern of the bridges, rather than about anything quantitative like size or number. As Euler puts it, the result is ‘concerned only with the determination of position and its properties; it does not involve measurements.’ It is a beautiful example of how mathematical results can apply directly to real world, without any need for idealization.