Our postgraduate students' cutting-edge and innovative research is often rewarded with prizes and scholarships. Here we have featured some of the notable awards won by our students over the last few years.

Annual prizes are awarded at the School Postgraduate Conference.

All of our students aim to publish their thesis work in top international journals; many succeed in doing this while still enrolled.

Some recent student awards include: 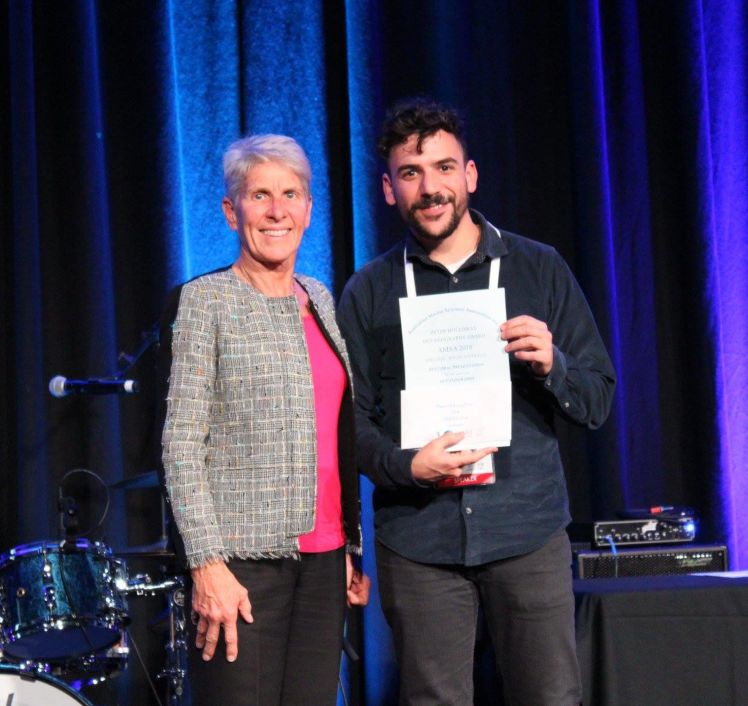 Alan Stoneham received an Honourable Mention at the 2021 Australian Mathematical Society's Annual Meeting for his talk, "A generalisation of the spectral theorem for self-adjoint operators".

Thomas Scheckter, who submitted his thesis in 2020, won a UNSW Dean’s Award for Outstanding PhD Theses.

Yudhi Bunjamin won a 2020 UNSW Science Student Equity, Diversity, and Inclusion Award. These awards recognise and celebrate the contributions of students to the field of equity, diversity, and inclusion.

Edward McDonald and Tom Stindl, who both submitted their theses in 2019, won UNSW Dean’s Awards for Outstanding PhD Theses.

Yudhi Bunjamin won the 2019 Bernhard Neumann Prize for the most outstanding talk delivered by a student at the 63rd Annual Meeting of the Australian Mathematical Society.

Gordana Popovic won the award for Outstanding Student Talk at the International Statistical Ecology Conference in Seattle in June 2016.

Hot on the heels of her J.B. Douglas Award, Thais Rodrigues was awarded the 2016 EJG Pitman Prize at the Australian Statistical Conference. The EJG Pitman Prize is awarded for the most outstanding talk presented by a ‘young statistician’.

Ashish Goyal was selected for an AUSTMS Lift-off Fellowship shortly after his thesis was approved. In late 2016 he took up a position as a Postdoctoral Fellow at the Los Alamos National Laboratory, U.S.

Anna McGann won Best Student Talk at the Annual NSW/ACT ANZIAM Meeting in November 2015 for her presentation "Generalising Epidemic Dynamics: Deriving a fractional SIR Model". Her achievement is especially impressive, considering it happened during her first semester as a PhD student. Her PhD is being supervised by Bruce Henry and Chris Angstmann.

Isaac Donnelly, who is supervised by Bruce Henry in the area of pattern formation, anomalous diffusion and networks, won a highly coveted Fulbright Scholarship. He was one of just 11 Fulbright postgraduate scholars selected in 2015, and the only UNSW postgraduate recipient. He left for Northeastern University in Boston in late 2015, to spend 10 months working on the development of non-linear control theory for networks under the mentorship of world-leading scientist Professor Albert-László Barabási.

Boris Beranger won the 2014 J.B. Douglas Award for his presentation, Extremal dependence models: state of the art and new advances. He delivered his talk at the 15th Annual J.B. Douglas Awards, held at the University of Technology, Sydney in November.
The J.B. Douglas competition is held annually between selected PhD students from NSW universities. The award commemorates the work of the late Jim Douglas, the first ever statistics appointment at UNSW.

Former PhD student Stephen Maher won an award for his thesis, "The application of recoverable robustness to airline planning problems", which was completed under the supervision of Gary Froyland and co-supervisor Cheng-Lung Wu (from UNSW Aviation). It was awarded in 2014 by the Aviation Applications Section of The Institute for Operations Research and the Management Sciences, which confers a prize for the best dissertation in any area related to aviation operations research.

Daniel Mansfield won the Analysis Prize at the Australian Mathematical Sciences Student Conference at ANU in July 2013, out of a pool of 90 students from across the country.

Stephen Maher won the 2012 Anna Valicek Award at the Airline Group of the International Federation of Operational Research Societies symposium in Arizona. He was selected for his research paper, "The recoverable robust tail assignment problem", with the awarding council stating that Stephen's win represented "an excellent accomplishment and affirmation" of his scholarship.