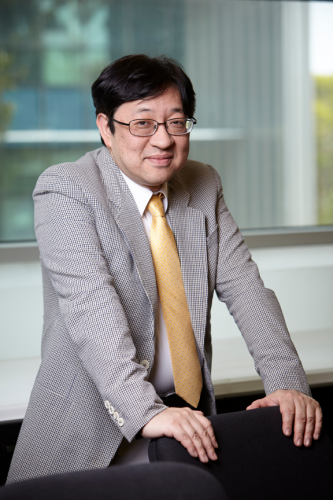 See a live robot soccer match and hear the creator of the Robodog competition talk about how maths will be critical to the future of our planet.

The School of Mathematics and Statistics and the School of Computer Science and Engineering (CSE) at UNSW will be jointly hosting this public lecture by Professor Hiroaki Kitano, President and CEO of Sony Computer Science Laboratories. This lecture is supported by the Australian Mathematical Sciences Institute as part of the Special Year for the Mathematics of Planet Earth.

Registration for this event is essential, as places are strictly limited.

In the same way that systems biology uses mathematics to model biological systems, mathematics can help us understand economic systems, climate change and medicine, and design intelligent systems which can respond to unpredictable environments.

Hiroaki’s talk will illustrate how mathematics is the key to questions of healthcare and global sustainability, and why mathematics should feed into strategic and policy decisions.

Hiroaki is best known for developing Sony’s AIBO (Artificial Intelligence roBOt) and is the founder of the robotic world cup tournament known as Robocup, in which CSE competes annually. The talk will be preceded by a robot soccer match featuring Australia's leading robotic soccer team rUNSWift. More details on this to come. Hiroaki has made significant contributions to Artificial Intelligence, Robotics, and Systems Biology.