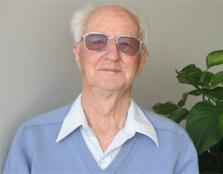 It is with sadness that we announce that our friend and colleague Jim Douglas died on 21 February 2013.

Jim was subsequently appointed/promoted to Associate Professor of Mathematical Statistics at UNSW in 1959, and he continued in this role through to his retirement in 1983. Jim continued as an active Honorary Associate in the School for almost three decades beyond his retirement.

We are the beneficiaries of many of Jim's contributions to statistics education, both within UNSW and nationally.

Jim led the establishment of the Honours in Statistics specialisation within the BSc and BA degrees at UNSW, established the coursework Master of Statistics program in 1969, pioneered the integration of computing into mathematics and statistics, introduced an industry-based vacation employment scheme for students, and pioneered summer schools for teachers of secondary mathematics starting in 1962.

He was an active member of the Statistical Society of Australia, and co-organised many major international conferences.

Jim was also well known for his research on statistical distribution theory. Jim established the Alma Douglas Scholarship, named after his wife, in 2007 as an enduring legacy to encourage outstanding students to undertake full time studies in a Bachelor of Science degree majoring in Statistics.

In recognition of his distinguished service to the University, the profession, and the discipline, Jim was awarded the degree of Doctor of Science, Honoris Causa, by UNSW in 2003.

Those of you who knew Jim will remember a very warm, gentle, and personable colleague who was devoted to students and Statistics education in Australia.

A morning tea was held in the School on Thursday 28th February in memory of Jim. Prof Bruce Henry spoke of Jim's many achievements and contributions to statistics education, and also spoke fondly of Jim's personal traits of generosity and kindness which so many School staff vividly remember.

Beloved husband of Alma (deceased). Father of Jan and Alan, grandfather of James and Emma.

In accordance with Jim's wishes a private cremation will be held. No flowers by request, donations if wished to Bush Heritage Australia, phone 1300 628 873.