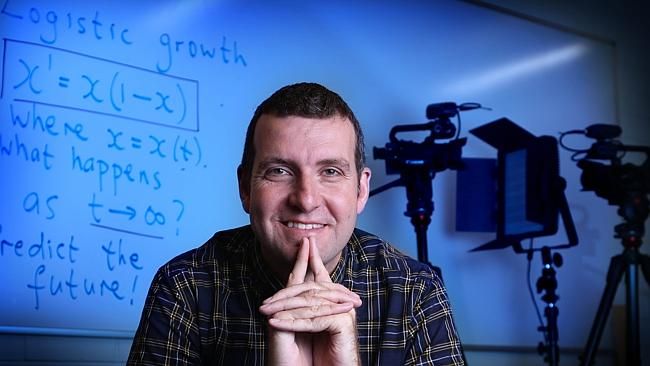 Maths lecturer number one with students

CHRIS Tisdell’s maths videos have proven so popular their viewers have become a mathematical study in their own right.

The University of NSW maths lecturer says his virtual classroom is the top-ranked Group of Eight website on the education hub YouTube EDU, and among the top 40 in the world. Earlier this year it notched up four million downloads — a feat he has followed with a million downloads of his free online maths textbook.

Dr Tisdell says it took four years to accumulate the first million video downloads after he started producing his YouTubes in 2008. But since 2012, the growth has been exponential.

The hits have provided material for a new project: an analysis of his audience. “I’ve got six years of data from my YouTubes — that’s probably one of the longest (durations) for an online learning study anywhere in Australia.”

Dr Tisdell says he crunched the numbers a couple of months ago and found that over 40 per cent of his audience was female — a far cry from the typical gender mix in maths-heavy engineering courses, in which men outnumber women four-to-one.

“For me, that opens the question: is online learning an enabler for addressing the gender imbalances in maths, science and engineering?”

One theory is that the privacy of the online setting helps some students overcome their anxiety. “In groups, I think students feel pressure to look like they get it all the time, and instantly,” he says.

“Online it doesn’t matter if they catch on early or late. They can catch on in their own time.”

Dr Tisdell says his hundreds of free maths videos have been downloaded in more than 200 countries — pretty well everywhere except China, where YouTube is blocked.

His “Engineering mathematics: YouTube workbook”, launched in 2012, combines written lessons with video tutorials in which he solves maths problems step-by-step. Students can pause, rewind and fast-forward at will. He is about to launch a follow-up, “Introduction to vectors”, and has developed calculus presentations for mobile phones. A former DJ, he also helped develop an online maths game in which Year 8 ­students solve problems at a ­stadium-sized dance party.

Dr Tisdell says the satisfaction engendered by the work has been its own reward.

He says wealth and background shouldn’t define whether people can master the skills critical for careers in science, engineering, technology and finance.