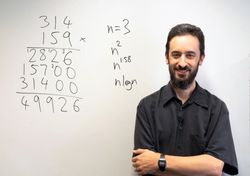 This surpasses the previously known complexity bounds in efficiency, confirming the 48-year-old conjecture of Schönhage and Strassen.

The problem is to find the fastest algorithm for multiplying two n-digit numbers, in the limit of large n. The naive algorithm learned in primary school has complexity O(n2 ). This was improved during the 1960s, culminating with the famous Schönhage-Strassen algorithm of Schönhage and Strassen from 1971, which realised the bound O(n log n log log n).

They also conjected that the best possible complexity bound for multiplication should be O(n log n). Between 2007 and 2016, progress was made on this conjecture, with a 2016 result of Harvey with Hoeven and Lecerf the state of the art at that time.