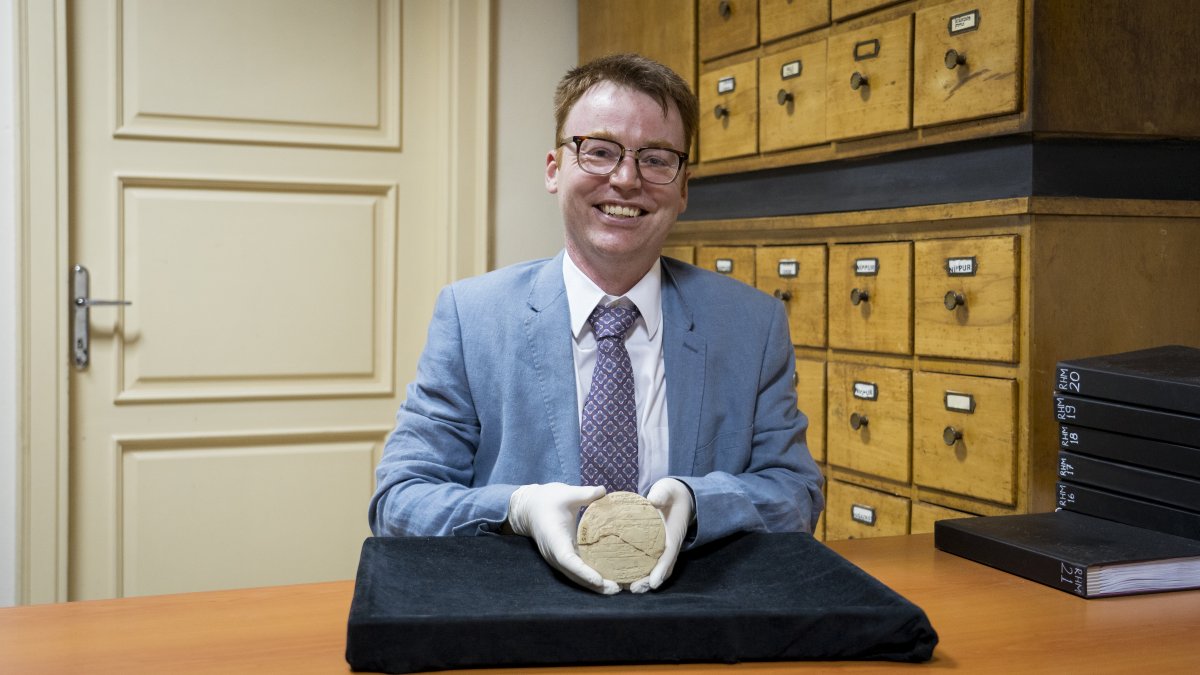 Dr Daniel Mansfield has revealed that an ancient clay tablet, which he travelled to see in Istanbul in 2019, could be the oldest known example of applied geometry - and has important implications for the history of mathematics.
The ancient artifact - dubbed "Si.427" - has been dated to the Old Babylon (OB) period around 3700 years ago, and not only exhibits a land surveyor’s field plan, but also reveals that mathematics during this era was more sophisticated than previously assumed.
Dr Mansfield travelled to Turkey two years ago to examine the tablet, which was discovered in central Iraq in the 19th century and has been in an Istanbul museum for more than 100 years.
In his paper, just published in Foundations of Science, School of Mathematics and Statistics Senior Lecturer Dr Mansfield explains the motivation behind proto-trigonometry in ancient Babylon.

“[Si.427 is] the only known example of a cadastral document from the OB period, which is a plan used by surveyors to define land boundaries", he told UNSW Sydney. "In this case, it tells us legal and geometric details about a field that’s split after some of it was sold off.”

To Dr Mansfield's delight, he was able to make a connection between Plimpton 322 and Si.427. 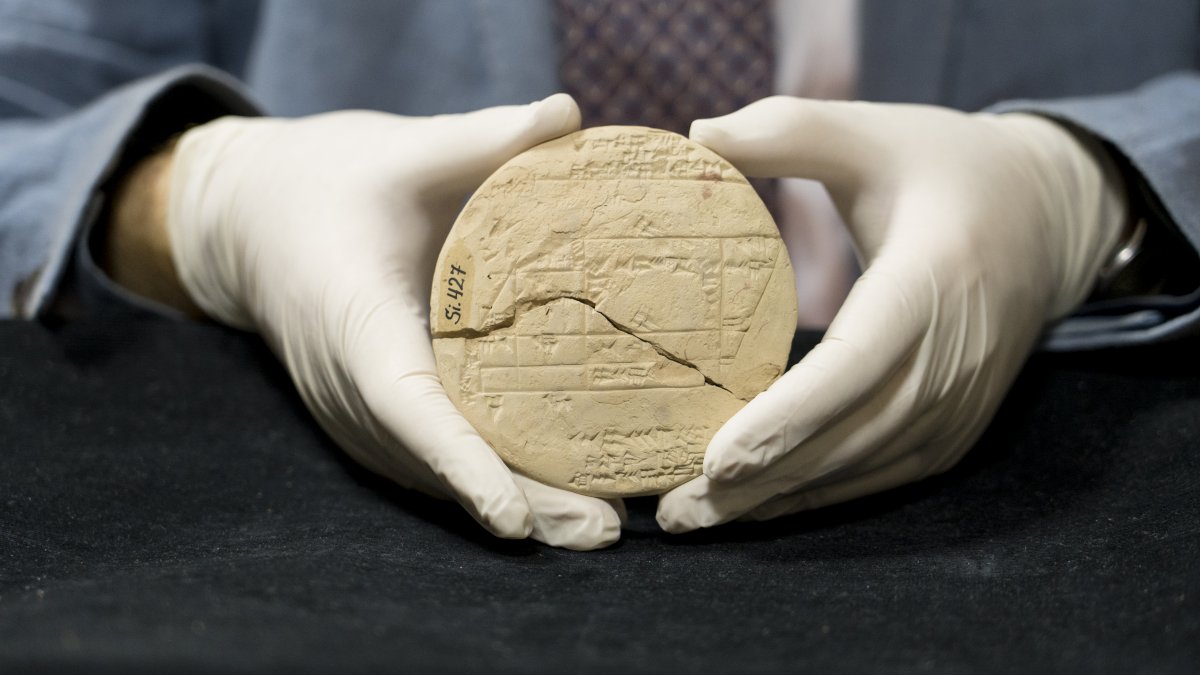 Four years ago Dr Mansfield and Professor Norman Wildberger attracted a wave of international media attention when they revealed that Plimpton 322, which had perplexed scientists for decades, was probably the world’s oldest and most accurate trigonometric table that could have been used by ancient mathematical scribes to construct palaces and temples, build canals, or survey land.

“It is generally accepted that trigonometry – the branch of maths that is concerned with the study of triangles – was developed by the ancient Greeks studying the night sky in the second century BCE,” said Dr Mansfield.

“But the Babylonians developed their own alternative ‘proto-trigonometry’ to solve problems related to measuring the ground, not the sky.”

He believes that with the new tablet, the Babylonians' interest in geometry is unveiled: to lay down precise land boundaries at a time when land was starting to become private.

Professor Norman Wildberger has praised Dr Mansfield's analysis of Si.427.
"Daniel Mansfield's new interpretation of the remarkable Old Babylonian field plan Si.427 shows clearly that Pythagorean triples like (5,12,13) and (8,15,17) were used by OB surveyors to establish perpendicular lines in their surveys around the Tigris and Euphrates rivers almost 4000 years ago.
"This convincingly demonstrates the application of geometry to important practical problems, long before the Greeks, 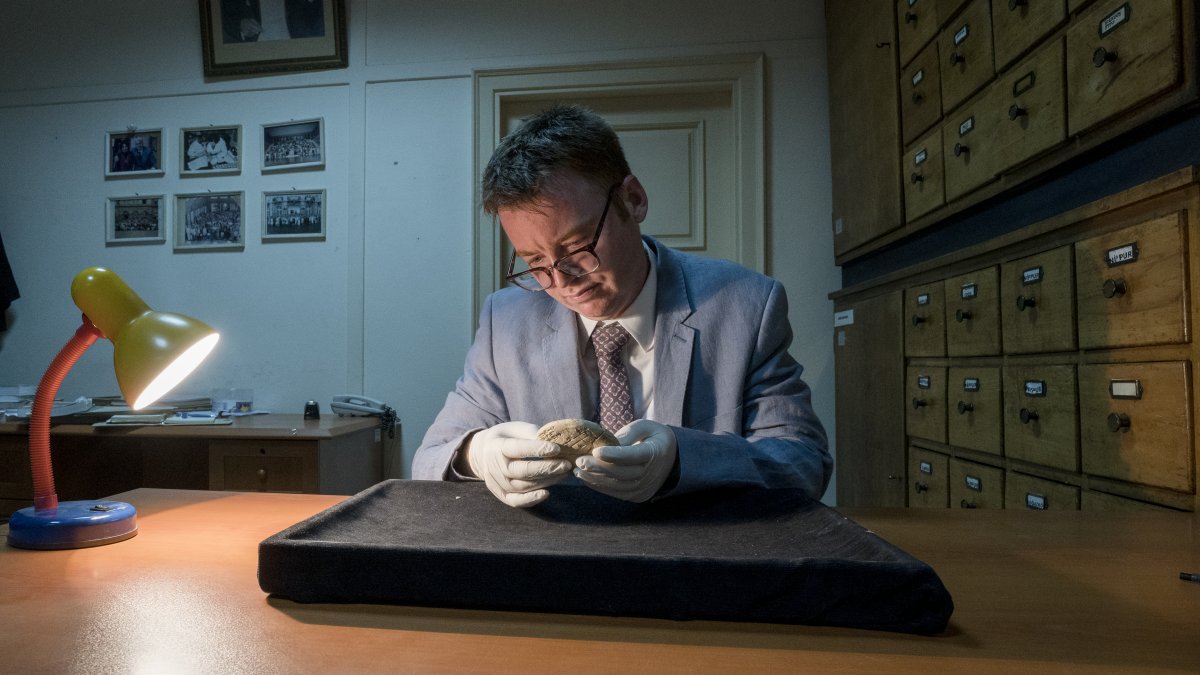 and going quite a bit beyond the traditional (3,4,5) right triangle which has been found in the ruins and artifacts of many ancient civilizations", said Prof Wildberger.
"A fascinating aspect of his analysis is how the Mesopotamian geometry is intertwined with their remarkably powerful sexagesimal (base 60) arithmetic.
"This work gives us new insight into the highly sophisticated mathematics of this fascinating culture, with much of it still buried under the sands of modern-day Iraq".

Dr Mansfield first became acquainted with Si.427 after perusing excavation records, triggering a mission to track it down.

“It was a real challenge to trace the tablet from these records and physically find it – the report said that the tablet had gone to the Imperial Museum of Constantinople, a place that obviously doesn’t exist anymore.

“Using that piece of information, I went on a quest to track it down, speaking to many people at Turkish government ministries and museums, until one day in mid-2018 a photo of Si.427 finally landed in my inbox.

“Even after locating the object, it still took months to fully understand just how significant it is, and so it's really satisfying to finally be able to share that story.”

On the eve of the release of Dr Mansfield's paper, Plimpton 322: A study of rectangles, we spoke to him about his study of Si.427 and his trip to Istanbul.
What motivated you to travel all the way to Istanbul in 2019 to get up close to this tablet, Si.427? 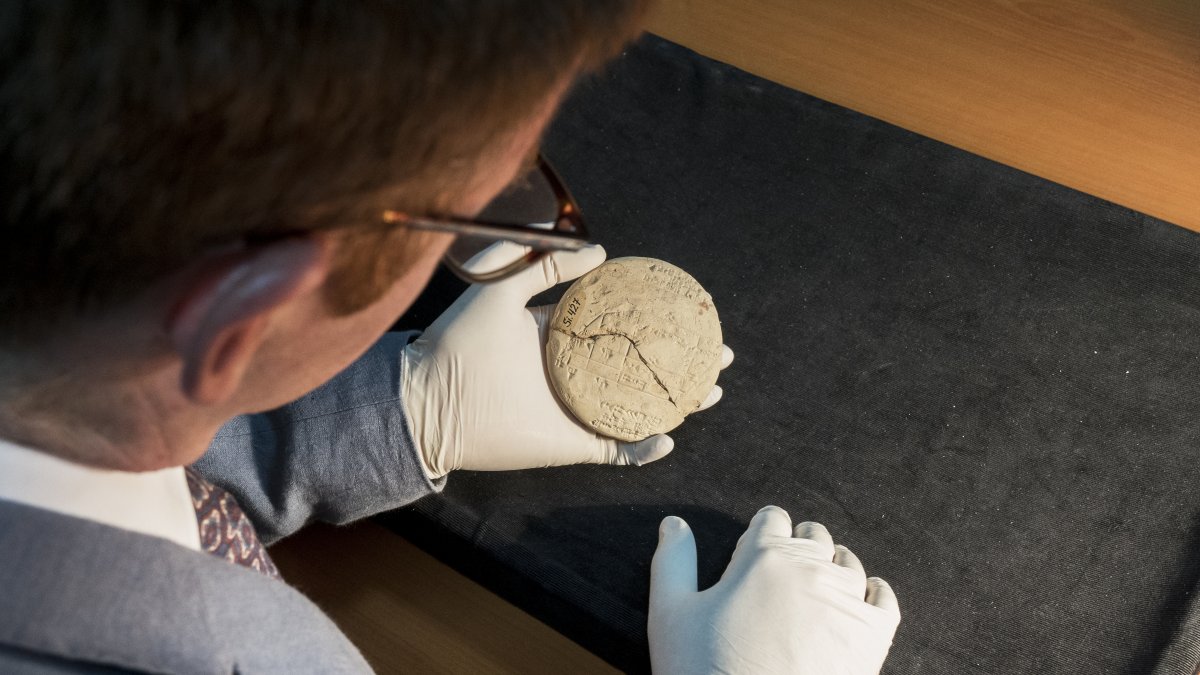 We have known for a long time that the Babylonians were interested in Pythagorean triples, but we never knew why. What were they doing with all these right triangles? What problem did they solve? I travelled to museums, libraries and private collections around the world looking for answers, which brought me to Istanbul and Si.427.
How did it feel to hold this piece of history, thought to be the oldest and most complete example of applied geometry, in your hands?
Conflicted. On one hand, this is such a culturally significant object that needs to be preserved, and on the other hand it needs to be studied. But the more you touch these ancient clay tables the faster they deteriorate. I'm just glad that it's back in the display cabinet.
You said that the discovery of Si.427 has unearthed the purposes of Plimpton 322, shining light on the problem that it helped solve. How quickly were you able to link these two pieces of ancient history together, and what was that like?
Imagine that you have two unfamiliar objects, and you think that one is a door and the other is a key. You know they fit together but you have no idea how. They were made by people who have been dead for about four thousand years and are inscribed with a language that has been dead for over two thousand years. It took years to figure out what these objects tell us. I remember the moment when I figured out they were related back in early 2018. I ran out of my office and burst into a meeting between two colleagues. I rambled exciting things about "Pythagoras" and "Babylon", and my colleagues were kind enough to smile while I got all my excitement out.
What is the significance of the use of Pythagorean triples in Si.427?
It shows us why the Babylonians were so interested in Pythagorean triples - surveyors used them to create perpendicular lines.
Just how sophisticated was the mathematics from this era (approx. 4,000 years ago)?
It is hard to say, but there is at least one person who deserves to be called a Mathematician and that is the author of Plimpton 322. This person made a list of 15 - or more likely 38, since the last bits are missing - Pythagorean triples and investigated their sides to find which ones were useful in surveying and which ones were not. This makes Plimpton 322 arguably the earliest known example of pure mathematics.
What was the highlight of your trip to Istanbul?
Can I say "Istanbul"? It is such an amazing place to visit, straddled between Europe and Asia with its layers of history. That, and Turkish hospitality.
For more on Dr Daniel Mansfield's research discovery, see:

Image credit: UNSW Sydney.
Images, from top:
1) Si.427, pictured here held by Dr. Daniel Mansfield at the Istanbul Archaeological Museum, is thought to be the oldest known example of applied geometry.
2) Si.427 shows the subdivision of a field in Sippar, modern day Iraq, dating from 1900-1600 BC.
3) Si.427 is a significant object because the surveyor applies the geometry of right triangles to make perpendicular boundaries. The discovery and analysis of the tablet have important implications for the history of mathematics.
4) The tablet’s significance was unknown until Dr Mansfield’s detective work was revealed today.